To obtain mastery of the strategic aspects of mediation, counsel need a good understanding not only of their own ethical obligations and procedural role, but those of the other parties. This includes having a sound grasp of the mediator’s role and constraints. We plan to discuss the ethical issues of mediators in each issue of the Negotiator’s Edge to enhance counsel’s decision-making power.

A question often asked of mediators and perhaps even more frequently discussed among mediators is: what’s the mediator’s role when there is a significant power imbalance between the parties? What should a mediator do if a party is not advancing an argument that could strengthen their position? Does the mediator sit on the sidelines and allow the process to unfold naturally or do they intervene to level the playing field or educate a party about something they are missing?

Despite the great deal of discussion around this issue, the options of the mediator are clearly dictated by the core duty of neutrality. A mediator must maintain neutrality or they have failed the process and the parties. A clear corollary of neutrality is that a mediator should never take an action that either harms or enhances the position of either party. If a mediator changes the actual balance of power, they have erred.

This does not mean that they should not engage in vigorous and forceful risk analysis with each party, as this process is the heart of any good mediation. But risk analysis doesn’t change the real positions of either party or impact the underlying balance of power in the relationship. Mediators must keep their thumbs off the scale, but should discuss what shifting strengths and weaknesses between the scales might result in. The role of a mediator doesn’t include offering advice to either side on enhancing their position or weakening their opponent’s.

For example, let’s say that Party A hasn’t advanced an argument that the mediator believes would enhance their position. What can and should the mediator do? If the mediator advised Party A they are missing a potentially useful argument, they would be either enhancing Party A’s position or damaging Party B’s position, clearly violating the principle of neutrality. They would also be reducing the chance of settlement by effectively moving the positions of the parties further apart. The thoughtful mediator wouldn’t make this mistake.

In the same circumstances, the mediator might ask Party B if they’ve considered the risk they would face if somewhere down the road Party A made that argument. This would allow Party B to modify their negotiating stance based on a perceived risk, without the actual strength of either party’s position being modified. Here, the mediator hasn’t placed his or her thumb on the scale, but rather is exploring the risks of a potential change in circumstances.

While the mediator should never advise or decide on behalf of a party or place his or her thumb on the scale, it can often be helpful to discuss contingencies that could manifest. In every circumstance, the mediator’s duty to remain neutral and impartial is paramount. 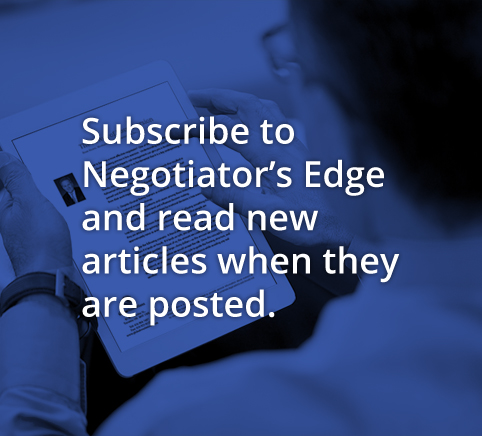 What can Negotiation Science do for me?
Scroll to top